To be known and recognised, every living being that we meet needs to have an identity.

This is the same in Nature in front of anything we cross path with and that seems to ask for our “recognition”.

Slightly before Christmas, on the 13th of December, on Saint Jocelyne’s day, which means “daughter of God” in German, a cocoon “fallen from the sky”, the title of a Jacques Higelin song, offered a great knowledge to us.

Our imagination was running wild as we were feeling curious in front of this small piece of art. We were there considering this thing respectfully, in the equanimity of a dark wood.

This unknown natural production could also have been celebrated by Mr Maurice Genevoix, one of the first ecologists, as he was qualified when he passed away, 40 years ago, by Mr Valéry Giscard d’Estaing.

Was this thing, that had been blown off a shrub by the wind, occupied?

This was more than a possibility, a certainty as we were looking through it, shaking carefully.

As my son Vyctor was reading “The Little Prince” by Antoine de St Exupéry, the story of the Fox who was looking for a home in winter made him realise that as this thing had come to meet us, we had become responsible for it.

A chrysalis (from the Greek “chrysos”, GOLD) was staying in there, knocking on the walls, living and telling us so.

Some old memories of our natural sciences classes in school were making us think about a mysterious butterfly that was growing there in the dark, sheltered from view and from trouble.

Mating of silkworms and their eggs

SILK is a textile material of animal origin, it is the thread produced by the caterpillar of the mulberry bombyx butterfly (silkworm) which feeds on the leaves of the white mulberry or Japanese mulberry tree.

First of all, a caterpillar excretes a silk thread from its sericogenic glands, then wraps itself in its production, balancing on a branch for two days, contorts itself and manages to build a little pyriform cocoon, following an innate architectural plan, waterproofed with saliva, rapidly hardening in the air, and woven into an inverted fishing net in order to protect itself from the intrusion of predators.

This is how a life is resting in the depths of an insignificant sarcophagus, glued high up on a bark, wrapped with loose ties 20 thousandths of a mm in diameter and 700 m long when unrolled.

Through the days, metamorphosis happen inside from the body of the caterpillar to a chrysalis, then a butterfly, over a period of gestation from 9 to 18 months, ending around Sainte Pascale’s day.

This is a complex metaphorical reality, that of the birth of the lepidopteran, its uninjured exit from the cocoon and, as soon as it is freed, still wet in the open air, its ability to breath, its blood pressure, the expulsion of meconium by the intestines, the miraculous blossoming in the air of a curled-up body, at the dawn of a life.

In short, it is a silent coming into the world, around the 17th of May, a famous day for the important protesting of the population of Mazamet (in the department of Tarn) in 1973 in favour of laws limiting the freedom of speed on the road killing so many animals and to encourage people to wear their safety belt. This is also the day of Sainte Pascale, “the passage” in Hebrew, and also my birthday.

Story to be continued next month 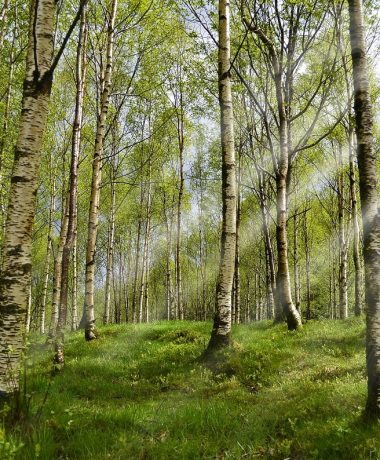