In the heart of the December darkness, there is an aristocratic bird of prey watching over us: the tawny owl, from the Strigidae family, “strix aluco” in Latin.

Motionless, perched in the trees and braving the frost, it is the nocturnal sentinel of our dreams, singing under the moon.

Described as a “hooting cat”, this attribution would be linked to the “Chouans de Vendée” and their leader the hercule Cadoudal (1793 – 1796 ), who used to scream as a rallying cry in the smuggling of salt, during the French Revolution.

This sedentary bird has a red or grey speckled coat. It lives only in the forest and, like a troubadour, it sings a courteous prosodic song, easy to hear in the silence of the nights.

Shaken by this soft, distant hooting, in the midst of the impressive silence, a future mate will answer with tender bird songs to the insistent calls of a male tawny owl, often mistaken with a common owl.

Thus begins a flying courtship, with the hope of a monogamous existence for at least ten years in the same conquered territory.

In Greco-Roman antiquity, the owl was favoured by the goddess Athena for its virtues: knowledge, wisdom, temperance.

It is the symbol of the Philosophers and, according to Friedrich Hegel, “the owl of Minerva, goddess of the superior ideas, taking flight at dusk”.

Posted at the end of the day, this fearsome carnivore silently swoops down on small animals, using its 4 fingers with powerful sharp claws as well as tactile feathers called “vibrissae”, located at the corners of its hooked beak, helping to sense and grasp its prey.

The tawny owl flies slowly in the air, with a wingspan of one meter, carrying its weight of 460 grams, dressed in a fluffy livery up to its legs and feet.

It is a very imposing animal, less than the 2.5 kg eagle owl. The smallest nocturnal bird of prey is the little owl weighing only 65 grams.

With its round head and its flat, large and smooth face, without any egrets unlike the owl, the tawny owl looks like a benevolent animal with a questioning, unalterable and extremely deep gaze.

Its parabolic round face channels sound to ears with invisible auricles, so that the tawny owl actually has a hearing ability ten times greater than humans do.

It has a rigid binocular vision, compensated by a cranial rotation of 270°, allowing access to a vast panorama while keeping its body still.

The tawny owl is the only nocturnal bird of prey with fixed black eyes, not widely ringed with yellow.

During the day, the short-eared owl slumbers under the climbing ivy of a tree, anticipating the onslaught of aggressive sparrows that hate it. Then, it completes its scrupulous grooming in sun, rain, and dust baths, with its wings spread wide.

The female, satisfied with the ample cavity of an ancient tree, a crevice or an abandoned corvid nest, lays four rather rounded white eggs.

After twenty-nine days of incubation, it remains in the place, which has been collectively cleaned of dirt and family pellets.

Honorably supported by the zeal of a courteous partner, the female tawny owl shreds the delivered food, offering it sparingly to her offspring.

In times of food shortage, the weakest chicks are sacrified and used by the breeders to save the species.

The study of the regurgitations (hair, bones, feathers) emanating from wild captures theaches us about the advantages of this salutary territorial presence.

The emergence of a relentlessly aggressive tawny owl is likely to seriously mutilate any individual discreetly approaching its litter. To his cost, photographer Eric Hosking lost an eye.

The young tawny owls, born in their shelter, are waiting to jump into the void.

The shaggy young, which have escaped from their mother’s shelter, will stay around for a few more weeks before they are feathered and emancipated, under the supervision of their supportive parents.

Considered as “birds of ill omen”, the owls were martyred, sacrificed, nailed alive to doors, and cruelly trapped by the legs with bait in iron jaws where, in great suffering, they died, definitely joining the Alyscamps, the place in Arles for virtuous and wise beings, in the grammatical meaning of the word.

This time is over, as the Queen of the nights has benefited for 45 years from a legal protection which forbids to find it, to breed it, to kill it, or even to naturalize it. In short, this is the granting of a very nice existential right for this sensitive bird, which destiny is to feel “the exhilaration of days and nights”, as Charles Baudelaire claims in his little prose poems.

See you next month with a new tribute to Nature and Beauty.

Next biennial owl night organised with the LPO: March 2023 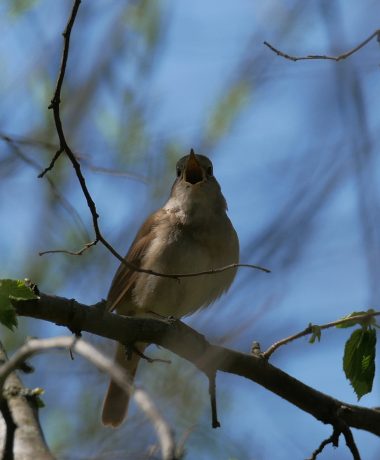